Effectively coordinating the motion for a large number of robots or vehicles in crowded spaces is an important problem with applications to warehouse automation, traffic routing, among others. Adapting a graph-theoretical approach, one can show that feasibility tests can be completed in linear time and computing complete feasible solutions can be done in cubic time. The analysis boils down to the study of the structure of the permutation groups 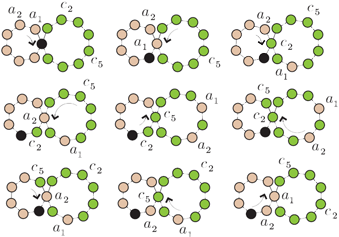 induced by synchronous robot motions. For example, the figure to the right illustrates how the locations of two robots ($c_2$ and $c_5$) may be exchanged on a cycle using a limited number of moves. For more details, see this paper.
However, computing optimal or near-optimal solutions for such problems, in terms of minimizing task completion time or traveled distance, proves to be highly challenging as a computational problem. This is due to the curse of dimensionality: each robot introduces at least a few degrees of freedom. For $n$ robots, the search space is then $O(n)$ dimensional, which quickly becomes prohibitive to explore. Indeed, we could readily establish that common time- and distance-based objectives are NP-hard to optimize on general graphs, even planar ones. Different objectives generally cannot be optimized simultaneously.

On the other hand, because each robot mainly interacts with robots that are close by, decoupling of the search space is generally possible to some extent, unless the density of robots approaches the limit. Given the very high 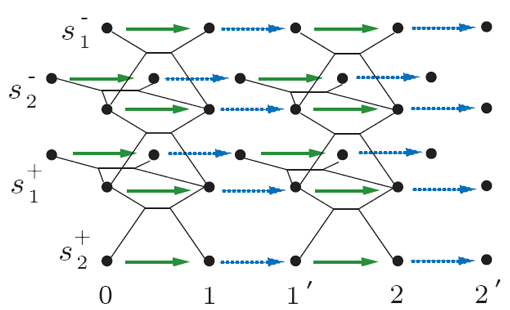 dimensional search space, we take the approach of early discretization and work with an extracted graph structure. By converting the problem into a multi-flow one (see the figure to the left) and adapting a novel integer programming (ILP) based solution scheme, we are able to handle a broad spectrum of difficult problems, providing a leap in computational performance on multi-robot coordination problems. Using the graph-based method and an efficient discretization of continuous domains, we allow extremely dense setups with up to 30+% of free space occupied by robots-our algorithms are capable of solving such instances within seconds for up to hundreds of robots while often ensuring 1.x-optimality (see the video). The source code of all current results can be found here.

Let $G$ be a simple connected graph with $n$ vertices and let there be $p < n$ labeled pebbles. In a configuration, the pebbles occupy $p$ distinct vertices of $G$. From a configuration, a pebble may move to a nearby unoccupied vertex in one step. Now given two configurations $S$ and $D$, a natural question is whether $S$, $D$ are reachable from each other. Kornhauser, Miller, and Spirakis (FOCS 1984) showed that this problem can be decided in polynomial time but a solution may require $\Theta(n^3)$ moves. This suggests that no algorithm can solve all instances of the problem under cubic time. Therefore, deciding whether such a problem is feasible using less time helps avoiding unnecessary computations on infeasible instances. Auletta et al. (SWAT, 1996) worked on pebble motion on trees and provided a linear time algorithm for testing the feasibility of this problem. Observing that pebbles on a 2-edge-connected component are almost always equivalent, we reducethe pebble motion on graphs to the pebble motion on trees in linear time by contracting these components intoa single edge. We obtained this result independently of Goraly and Hassin, whose work imply a similar result.